Scientists on April 15 provided the most comprehensive look to date at one of the solar system’s most exotic features: prime lakeside property in the northern polar region of Saturn’s moon Titan – if you like lakes made of stuff like liquid methane.

Using data obtained by NASA’s Cassini spacecraft before that mission ended in 2017 with a deliberate plunge into Saturn, the scientists found that some of frigid Titan’s lakes of liquid hydrocarbons in this region are surprisingly deep while others may be shallow and seasonal.

Titan and Earth are the solar system’s two places with standing bodies of liquid on the surface. Titan boasts lakes, rivers and seas of hydrocarbons: compounds of hydrogen and carbon like those that are the main components of petroleum and natural gas.

The researchers described landforms akin to Mesas towering above the nearby landscape, topped with liquid lakes more than 300 feet deep comprised mainly of methane. The scientists suspect the lakes formed when surrounding bedrock chemically dissolved and collapsed, a process that occurs with a certain type of lake on Earth.

The scientists also described “phantom lakes” that during wintertime appeared to be wide but shallow ponds — perhaps only a few inches deep — but evaporated or drained into the surface by springtime, a process taking seven years on Titan.

The findings represented further evidence about Titan’s hydrological cycle, with liquid hydrocarbons raining down from clouds, flowing across its surface and evaporating back into the sky. This is comparable to Earth’s water cycle.

Because of Titan’s complex chemistry and distinctive environments, scientists suspect it potentially could harbor life, in particular in its subsurface ocean of water, but possibly in the surface bodies of liquid hydrocarbons.

‘Fascinating object in the solar system’

“Titan is a very fascinating object in the solar system, and every time we look carefully at the data we find out something new,” California Institute of Technology planetary scientist Marco Mastrogiuseppe said.

Titan, with a diameter of 5,150 km, is the solar system’s second largest moon, behind only Jupiter’s Ganymede. It is bigger than the planet Mercury.

The research was published in the journal Nature Astronomy.

Even remote peaks are not free of microplastics: study Over a five-month period in 2017-2018, an average of 365 tiny bits of plastic settled every day on each square metre of an uninhabited, high-altitude area in the Pyrenees straddling France and Spain

A secluded mountain region thought to be free of plastic pollution is in fact blanketed by airborne microplastics on a scale comparable to a major city such as Paris, alarmed researchers reported on April 15.

Over a five-month period in 2017-2018, an average of 365 tiny bits of plastic settled every day on each square metre of an uninhabited, high-altitude area in the Pyrenees straddling France and Spain, they reported in the journal Nature Geoscience.

“It is astounding and worrying that so many particles were found in the Pyrenees field site,” said lead author Steve Allen, a doctoral student at the University of Strathclyde in Scotland.

The study focused on microplastics mostly between 10 and 150 micrometres across, including fragments, fibres and sheet-like pieces of film.

By comparison, a human hair is, on average, about 70 micrometres in width.

“We would never have anticipated that this study would reveal such high levels of microplastic deposits,” added co-author Gael Le Roux, a researcher at EcoLab in Toulouse, in southwestern France.

Plastic litter has emerged in the last few years as a major environmental problem. Up to 12 million tonnes of plastics are thought to enter the world’s oceans every year, and millions more clog inland waterways and landfills.

Plastic takes decades to break down, and even then continues to persist in the environment. Scientists are only now beginning to measure the damage to wildlife and potential impacts on human health.

A study earlier this year uncovered plastic fragments in the guts of animals living more than 10 kilometres below the ocean surface. Two whales found beached since the start of the year — one in the Philippines, the other in Sardinia, Italy — had 40 and 20 kilos, respectively, of plastic in their stomachs.

Microplastics have also been found in tap water around the world, and even the furthest reaches of Antarctica.

As polluted as Paris

Researchers used two monitoring devices to independently measure particle concentration in an area long considered to be among the most pristine in western Europe.

The nearest village is seven kilometres away, and the nearest city, Toulouse, is more than 100 kilometres.

While the scientists were able to identify the types of plastic, they could not say with certainty where they came from or how far they had drifted.

Analysing the pattern of air flows, they surmised that some particles had travelled at least 100 kilometres. “But due to the lack of significant local plastic pollution sources, they probably travelled farther,” Deonie Allen said.

Samples — transported by wind, snow and rain — were collected at the meteorological station of Bernadouze at an altitude of more than 1,500 metres.

The researchers were stunned to find that the concentrations of microplastic pollution were on a par with those found in major cities, including Paris and the southern Chinese industrial city of Dongguan.

“Our findings are within the range of those reported for greater Paris, and can thus be considered comparable,” Deonie Allen told AFP. “We did not expect the number of particles to be so high.” The key culprit, according to Skymet is El Nino—the warming of the central Pacific Ocean that is frequently associated with drying monsoon rains.

A month after ruling out a drought, private weather forecaster Skymet said it expects the coming monsoon rains to be “below normal” and about 7% short of the 89 cm the country usually gets from June to September. Not only is the monsoon expected to begin sluggishly but rain in July — a key month for agriculture — is expected to be nearly 9% short, the company said at a press briefing on Wednesday.

“In terms of geographical risk, Skymet expects that eastern India, along with a major portion of Central India, is likely to be at a higher risk of being rain deficient, especially during the first half of the season. The onset month of June is going to have a very sluggish start and deficit rains are likely to spill into July,” the company said in a statement. “The second half of the season would see better rainfall wherein August is expected to be a shade better than September.”

June was likely to post only 77% of its historical average of 164mm, July 91% of its average, according to Skymet.

The key culprit, according to Jatin Singh, Managing Director, Skymet, was the El Niño — the warming of the central Pacific Ocean that’s frequently associated with drying monsoon rains.

“The Pacific Ocean has become strongly warmer than average. The model projections call for 80% chance of El Niño during March-May, dropping to 60% for June to August,” he said. The consensus, as of March among global meteorologists, is that the El Niño would form from March to May and there was a “less than 50% chance” of a strong El Niño from June-August.

An El Niño is declared when three straight months register a 0.5-1 degree C rise in sea surface temperatures in the Central Pacific.

In February, Skymet had predicted normal rain on the back of projections that the El Niño was fading rapidly. 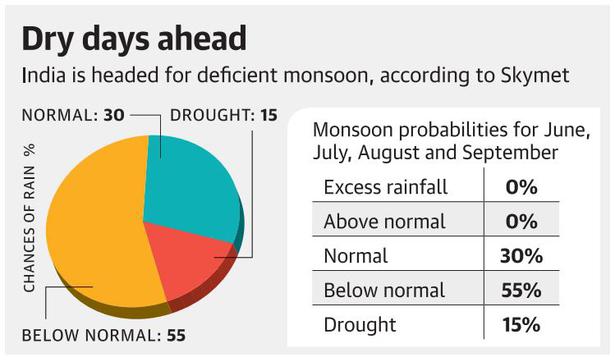 “However, the scenario changed completely in February and presently, moderate El Niño conditions are prevailing over the Pacific Ocean. In fact, El Niño could be declared anytime now. By May-June-July, there is a 66% chance of El Niño,” said the statement.

Officials from the India Meteorological Department (IMD) refused to comment on Skymet’s forecast.

The agency, which is expected to announce its forecast on April 15, said on April 1 that it expects “weak El Niño conditions” (a heating of around 0.5 C) to prevail during May-June.

“Any forecast of El Niño beyond that is premature,” an official told The Hindu.

The IMD was still factoring in sea surface temperature data in their forecast models and, with the Model Code of Conduct in effect for the Lok Sabha elections, required certain clearances before publicising the forecast, the official added.

Skymet said that another key parameter — the Indian Ocean Dipole, when the western Indian ocean is warmer and has more rain clouds than the east — appeared favourable to the Indian monsoon.

In 2018, both Skymet and the IMD over-estimated monsoon rainfall in April, and India ended up with below normal rainfall of 91% of what it typically gets in a normal monsoon year. 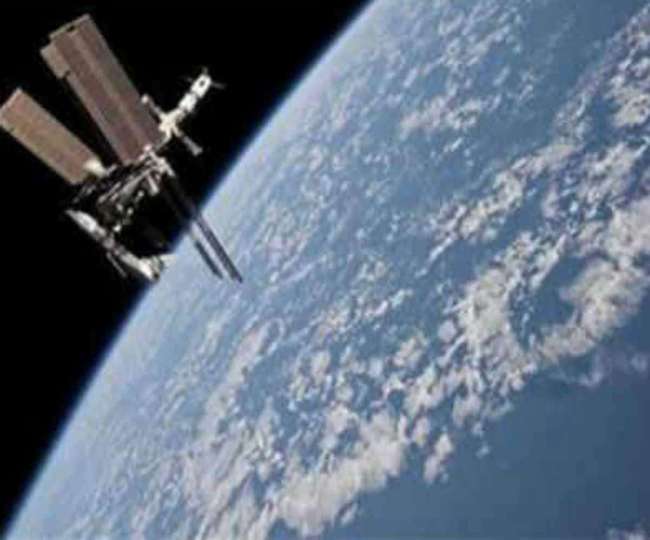 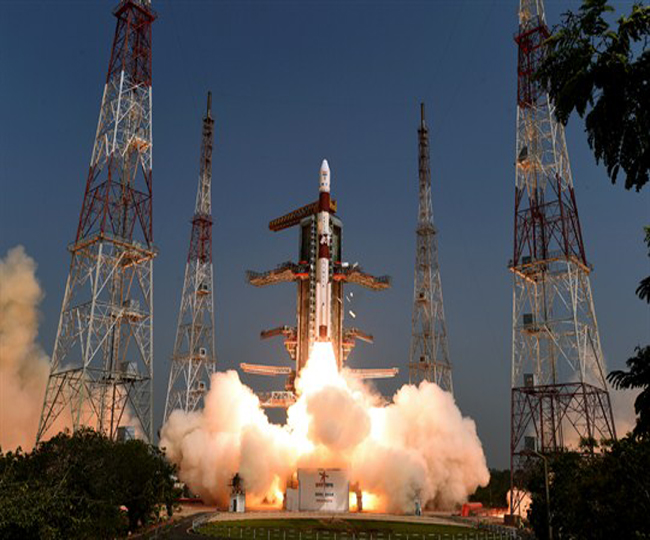 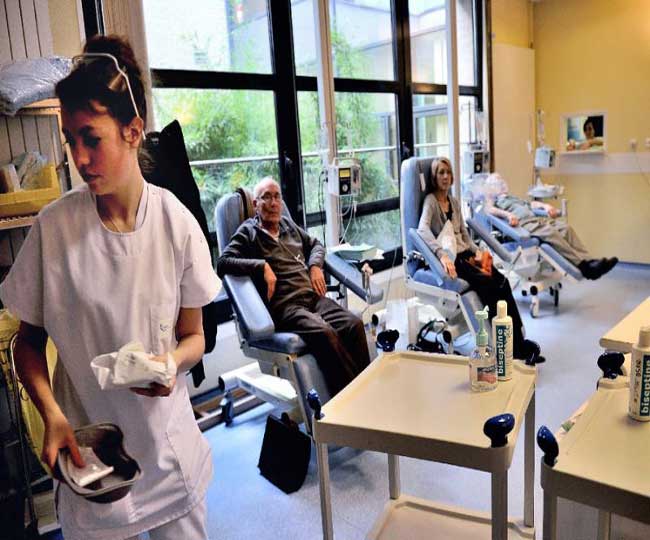 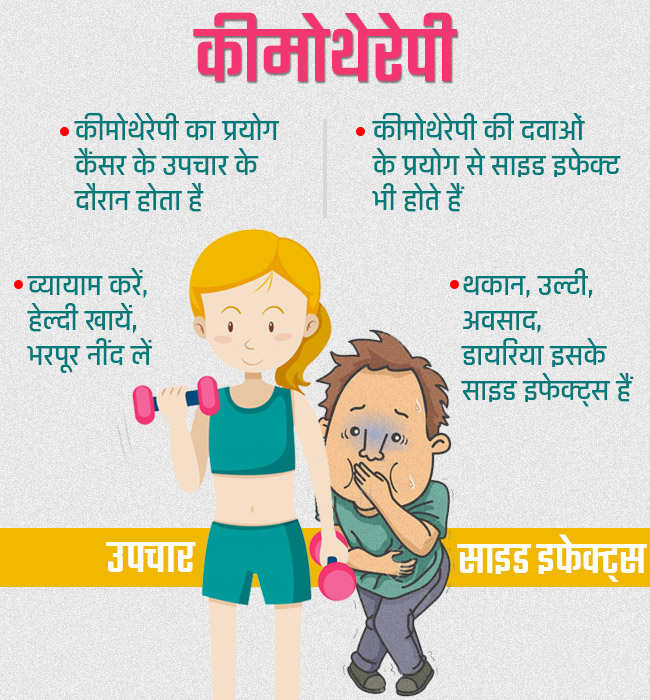 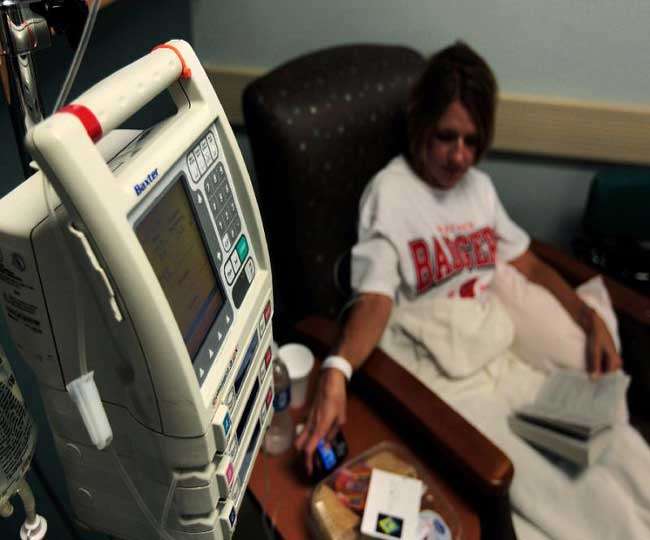